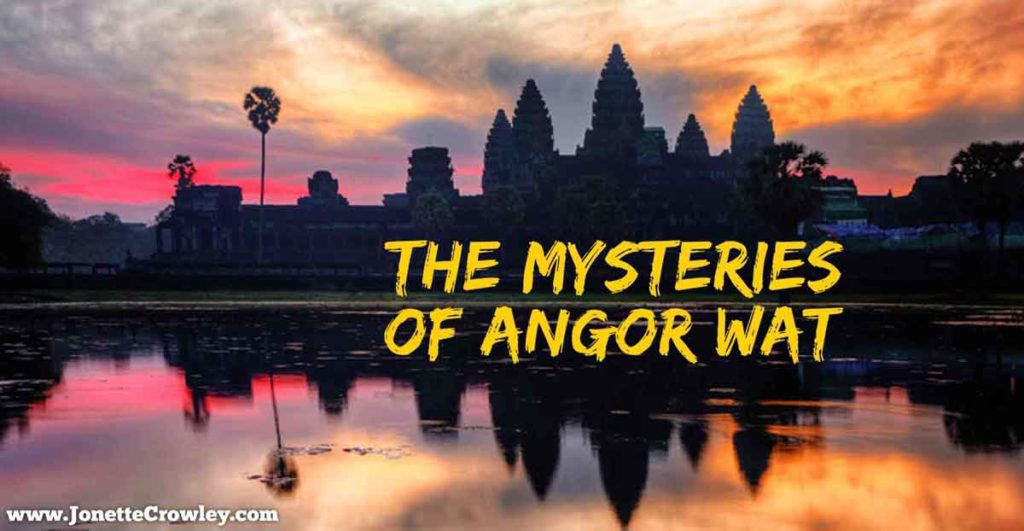 Join Jonette on a Sacred Journey to Southeast Asia in November!

The Home of the Gods? 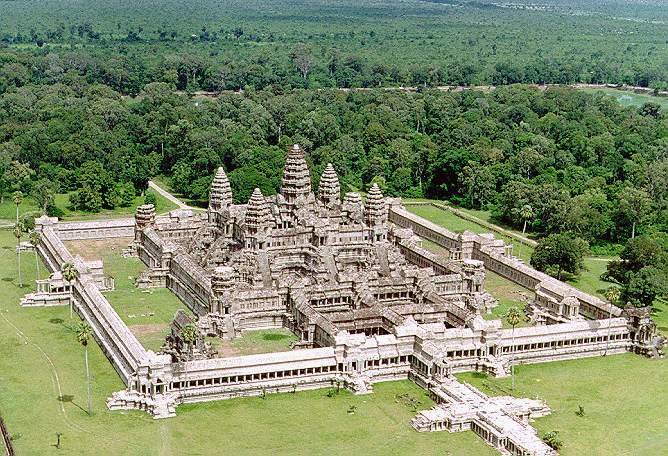 One of the ‘Wonders of the Ancient World’ Angkor Wat in Cambodia may be on your ‘bucket list.’ For most of us, Angkor Wat conjures images of an Indiana Jones explorer stumbling through the jungle coming upon giant, carved blocks of stone strangled in vines and labyrinths of tree roots, and so re-discovering a place lost in time. However, this amazing temple complex of more than 400 acres was never lost. The local Khmers have never stopped worshiping in this classic, symmetrically built Temple City. 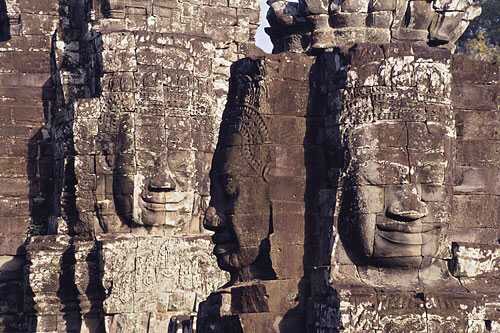 The main temple is an enormous three level pyramid built on a floating rectangular piece of land surrounded by water. It consists of nine towers, each more than 60 meters high, symbolizing the peaks of Mount Meru, the mythical sacred mountain in Hindu mythology—the home of the gods. Similar descriptions of a sacred mountain of the gods also appear in Javanese legends, Mount Olympus in ancient Greece, and other mythologies around the world. Could they be referring to a far away world where the gods came from?

Certainly Angkor Wat is one of the largest and most complex religious monuments ever constructed in the history of mankind. Truly a city of the Gods. There is no doubt it is a power place laid out specifically as part of a cosmic sacred geometric network. It lies on a nexus point on the global world grid of powerful vortex energies. These planetary node points create a global system of energy that receives and transmits between the Earth and cosmos. Being there encompasses us in powerful transmissions for transformation. 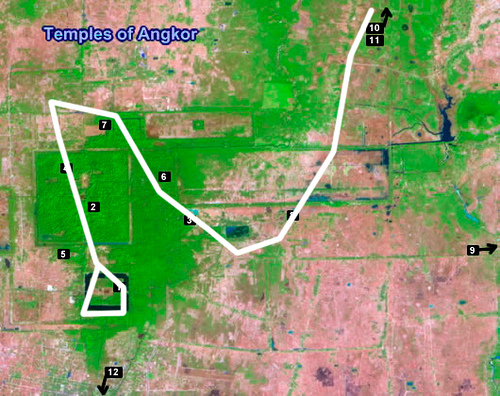 Computer simulations show that the placement of the principal temples of the Angkor complex mirrors the stars in the constellation of Draco at the time of spring equinox in 10,500 BC. This date is far earlier than the construction by the Khmer King Suryavarman the Second between 1100 and 1150 CE, we see today. This lends credence to the theory that we find at many sacred sites, they were known power spots from much more ancient times. At Angkor It appears that its purpose was to mirror the heavens in order to assist in the harmonization of the earth and the stars. The mathematical layout of the temples and the theme of much of its sculpture, particularly the asuras (‘demons’) and devas (‘deities’) communicate the phenomenon of the precession of the equinoxes and the slow transition from one astrological age to another.

This southeast Asian jewel represents one of humankind's most astonishing architectural masterpieces. Once home to more than a million people, it’s King ruled over a vast domain from Vietnam to China to the Bay of Bengal. The city had irrigation, paved roads and grand buildings. Today more than 100 of the stone temples still remain.

The temples were places to honor the god Vishnu and to realize our human divinity. Angkor as a physical representation of heaven on earth was a pilgrimage destination of importance throughout Southeastern Asia. Today we are called again to be pilgrims, journeying afar to find the truth of what lies within us.

Jayavaram VII, spoke of his intentions in erecting temples as being:

“Full of deep sympathy for the good of the world, so as to bestow on men the ambrosia of remedies to win them immortality….By virtue of these good works would that I might rescue all those who are struggling in the ocean of existence.”

Mystery of the Women 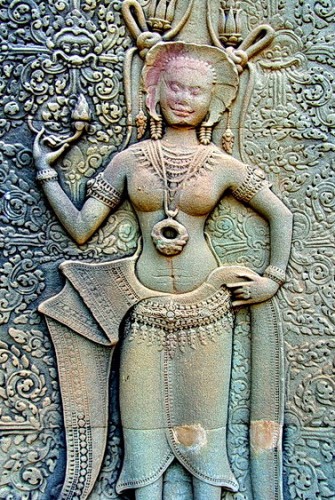 Another abiding mystery of the temples of Angkor Wat is its stone sculptures of 1796 women in the center of the city. Each is a unique portrait with it’s own features and attitude. The sheer number of these are significant, crowding out even the figures of the gods.

It is said that the King had hundreds of wives, female attendants and staff, including all-female bodyguards. Each evening he ascended to the summit of the central tower of the main Temple to spend the night with his only true wife, the supernatural ‘Queen of Serpents.’ Could this entire place be a star-gate? A place of communing with the Gods? What secrets did they know that we have forgotten? Can we touch into them too?

There is a real conviction amongst the Khmer people that whoever built Angkor Wat possessed extraordinary talents. The myth is that the builders of their great Temple City saw themselves as the creators of humanity, and the keepers of humanity’s secrets. The continued existence of the whole world, they believed, relied on the religious duties of the Khmer King.

Many have hinted that Angkor contains wisdom that is Atlantean in its origins. Some of their ancient dances have elements similar to dances in Hawaii and the South Pacific, where the roots go back to Lemuria. The lost civilization archetype is powerful in this place, evidenced by the technology, sophistication and architectural complexity seemingly out of its time.

Angkor is a power place, a place of cosmic connections. The average tourist is mostly unaware of the meaning of the ground on which they wander. The temples of the Angkor area are still alive as points of worship and pilgrimage. We feel that these gateways to the heavens are still open to those who seek with an open heart. Do you feel called to be in service at this place for yourself and for the highest energies for humanity? The stones will speak if you will listen. The secrets are hidden within the walls of the Temples, and speak through the power of Nature here. It is no wonder that especially now, it calls to so many people from across the world.

Join channel, author and ‘Spiritual Indiana Jones’ Jonette Crowley on a spiritual quest to unlock the true meaning of this this place and to lift ourselves and humanity into a New Earth.

"The Spiritual Magic of Cambodia and Vietnam" 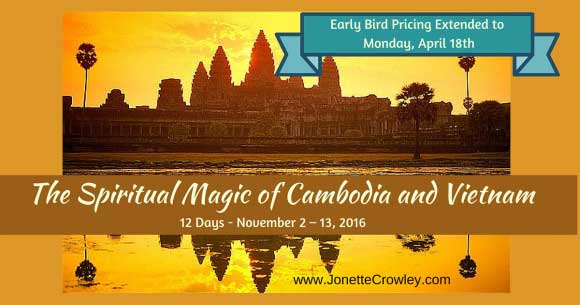 Jonette has been guided to lead a series of 3 journeys with the mission to help lift human consciousness. This triad begins in 2016 with Cambodia and Vietnam. 2017 will be Australia, with an option to New Zealand. This will culminate in Tibet in 2018. We invite any who hear the call to be the core team for all 3 journeys. Of course we invite you to be part of any of the trips. These journeys are always life-changing.

Our focus will be accessing the Spirit in the ancient temples of Angkor Wat— a power place seemingly out of time that calls us forward to explore the truth of humanity and our destiny. The spiritual jewel of Indochina, Angkor Wat is a breathtaking complex built to harmonize earth and stars. We’ll be immersed in the beauty of waterways and rice fields. We’ll hold healing in our hearts for the gentle people who have endured such war and suffering in this magical land. Even Our spiritual mission is both global and deeply spiritual, seeking our own pathway to enlightenment.

These events have passed.

Jonette is a spiritual adventurer, and modern-day shaman who leads spiritual tours to power places around the globe. She is a gifted channel, oracle, and author of the internationally best-selling books “The Eagle and the Condor” and “Soul Body Fusion®.” She is founder of the Soul Body Fusion® method for healing and beyond. With her guide “Mark” she teaches people to reach multi-dimensional and quantum states of consciousness. JonetteCrowley.comhttps://centerforcreativeconsciousness.com/