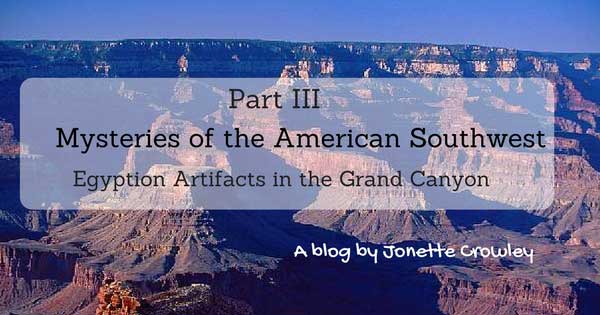 I’ll be leading a spiritual adventure tour through the Southwest in May 2016.  (There are still spaces left. Please see details at the end of this blog.) As part of that preparation I’m blogging about some of the mysteries of the area. One of the most amazing is the discovery in 1909 of an Egyptian-style tomb with an entrance high up on a cliff on the Colorado River in the Grand Canyon area.

The April 5, 1909 issue of the Arizona Gazette had a front page article about explorations in the Grand Canyon. The headline read: “Mysteries of Immense Rich Cavern Being Brought to Light. Remarkable finds indicate ancient people migrated from Orient.”

The bombshell find was more than extraordinary! The article went on to say that archaeologists from the Smithsonian Institute “made discoveries which almost conclusively prove that a race which inhabited a  mysterious cavern, hewn in solid rock by human hands, was of oriental origin, possibly from Egypt, tracing back to Ramses!”

Several months before the extensive research by the Smithsonian. Mr. G.E. Kincaid was exploring the Colorado River system by boat from Wyoming to Arizona. Here is an excerpt from an interview he gave to the Arizona Gazette in 1909: 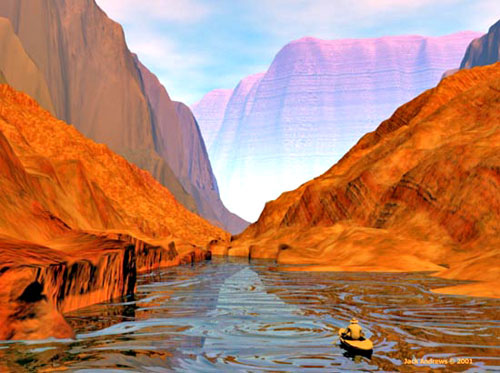 Some forty-two miles up the river from the El Tovar Crystal canyon, I saw on the east wall, stains in the sedimentary formation about 2,000 feet above the river bed. There was no trail to this point, but I finally reached it with great difficulty. Above a shelf which hid it from view from the river, was the mouth of the cave. There are steps leading from this entrance some thirty yards to what was, at the time the cavern was inhabited, the level of the river.

When I saw the chisel marks on the wall inside the entrance, I became interested, securing my gun and went in. During that trip I went back several hundred feet along the main passage till I came to the crypt in which I discovered the mummies… I gathered a number of relics, which I carried down the Colorado to Yuma, from whence I shipped them to Washington with details of the discovery.

The Passages and Shrine

Nearly a mile long tunnel underground, about 1480 feet below the surface, the long main passage has been delved into, to find another mammoth chamber from which radiates scores of passageways, like the spokes of a wheel. 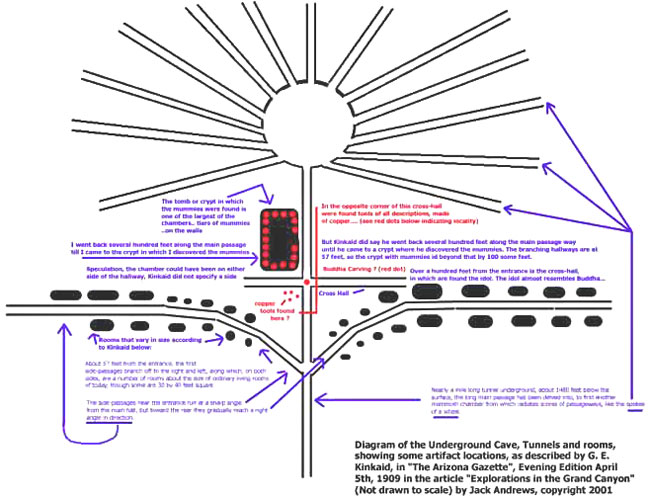 The main passageway is about 12 feet wide, narrowing to nine feet toward the farther end… The passages are chiseled or hewn as straight as could be laid out by an engineer… Over a hundred feet from the entrance is the cross-hall, several hundred feet long, in which are found the idol, or image, of the people’s god, sitting cross-legged, with a lotus flower or lily in each hand. 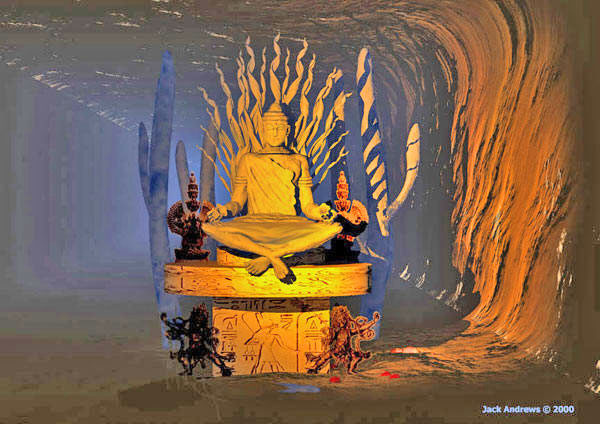 The cast of the face is oriental.. almost resembles Buddha… Taking into consideration everything found thus far, it is possible that this worship most resembles the ancient people of Tibet.

Surrounding this idol are smaller images, some very beautiful in form - others crooked-necked and distorted shapes, symbolical, probably, of good and evil.

There are two large cactus with protruding arms, one on each side of the dais on which the go- squats. All this is carved out of hard rock resembling marble. In the opposite corner of this cross-hall were found tools of all descriptions, made of copper. These people undoubtedly knew the lost art of hardening this metal, which has been sought by chemists for centuries without result… Among the other finds are vases or urns and cups of copper and gold, made very artistic in design. The pottery work includes enameled ware and glazed vessels.

Another passageway leads to granaries such as are found in the oriental temples. They contain seeds of various kinds. These granaries are rounded, as the materials of which they are constructed, I think, is a very hard cement. A gray metal is also found in this cavern, which puzzles the scientists, for its identity has not been established. It resembles platinum.

Strewn promiscuously over the floor everywhere are what people call -  cats eyes’, a yellow stone of no great value. Each one is engraved with the head of the Malay type.

The Hieroglyphics and Crypt 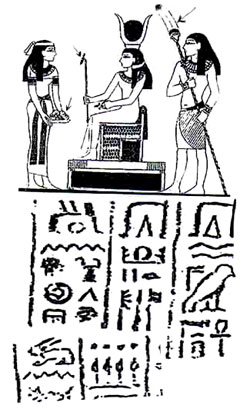 Above is a scan of a tracing of a xerox copy of photograph(s)? depicting hieroglyphics allegedly photographed by Kincaid inside the cave. This was submitted to me from a friend with a request that the source remain anonymous, a request I always honor. - Jack Andrews

On all the urns, or walls over doorways, and tablets of stone which were found by the image are the mysterious hieroglyphics the key to which the Smithsonian Institute hopes yet to discover.

These writings resemble those on the rocks about this valley. The engraving on the tables probably has something to do with the religion of the people. Similar hieroglyphics have been found in the peninsula of Yucatan, but these are not the same as those found in the Orient.

The tomb or crypt in which the mummies were found is one of the largest of the chambers, the walls slanting back at an angle of about 35 degrees.

On these are tiers of mummies, each one occupying a separate hewn shelf. At the head of each is a small bench, on which is found copper cups and pieces of broken swords. Some of the mummies are covered with clay, and all are wrapped in a dark fabric.

The urns or cups on the lower tiers are crude, while as the higher shelves are reached, the urns are finer in design, showing a later stage of civilization. It is worthy of note that all the mummies examined so far have proved to be male, no children or females being buried here. This leads to the belief that this exterior section was the warrior’ barracks.

Among the discoveries no bones of animals have been found, no skins, no clothing, no bedding. Many of the rooms are bare but for water vessels. One room, about 40 by 700 feet, was probably the main dining hall, for cooking utensils are found here…

Upwards of 50,000 people could have lived in the caverns comfortably. One theory is that the present Indian tribes found in Arizona are descendants of the serfs or slaves of the people which inhabited the cave. Undoubtedly a good many thousands of years before the Christian era, a people lived here which reached a high stage of civilization.

The chronology of human history is full of gaps. Professor Jordan is much enthused over the discoveries and believes that the find will prove of incalculable value in archaeological work. (Note: Jordan is the archeologist from the Smithsonian who led the extensive research after Kincaid reported the find.) 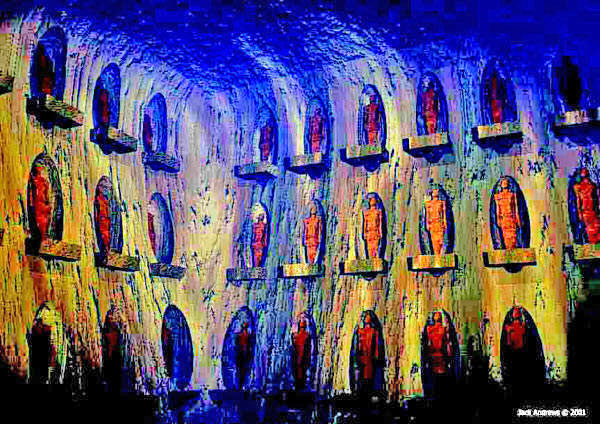 One thing I have not spoken of, may be of interest. There is one chamber of the passageway to which is not ventilated, and when we approached it a deadly, snaky smell struck us. Our light would not penetrate the gloom. ..Some say snakes… but others think it may contain a deadly gas or chemicals used by the ancients. No sounds are heard, but it smells snaky just the same. The whole underground installation gives one of shaky nerves the creeps. The gloom is like a weight on one’s shoulders, and our flashlights and candles only make the darkness blacker.

In my recent blog Mysteries of the American Southwest —Extraterrestrial Influence I wrote of an extensive cave complex near Chaco Canyon in New Mexico that the local Indians call ‘The Anasazi Cave.’ In it they found an especially unusual artifact, made of some sort of metal with strange hieroglyphic writing on it. (For more information see Dr. Sam Osmanagich’s book The Mystery of the Anasazi Civilization.)

In 1982 in Southern Illinois 1982 Russell Burrows, a retired Army Brigadier General and experienced caver, happened upon a cave well hidden along a tributary of the Little Wabash River. In spite of a walled-up entrance and nine feet of silt, Burrows excavated and found large quantities of startling artifacts. He wrote, “I did not have to be a genius to figure out that I stumbled into something that just should not be in Illinois.” From the five-hundred-foot tunnel and adjacent chambers he unearthed twelve burial crypts, a golden sarcophagus, urns, grave furniture, weapons, Egyptian-looking inscriptions in gold, and more than four thousand black stone tablets carved with writing, faces, ships, symbols, and maps! In Malta several years ago, the German researcher Dr. Herbert Zeitlmair handed me one of the stones from this incredible cache.

What it All Means…

The Hopi believe that they emerged from underground at the Grand Canyon. Could their spiritual knowledge, and their legends be remnants of teachings from an advanced civilization that is either Egyptian or has similar roots to the Egyptian culture? It is theorized that the Hopi have many similar beliefs to the Tibetans. Could the Tibetans, the ancient Egyptians and the Hopi all hold keys to understanding the greater Universe? Keys that we have lost? These gentle people on the dry mesa’s near the Grand Canyon hold tightly to their ancient wisdom. Their ceremonies and prayers are focused on keeping our world safely together.

Explore the southwest's sacred sites of with us 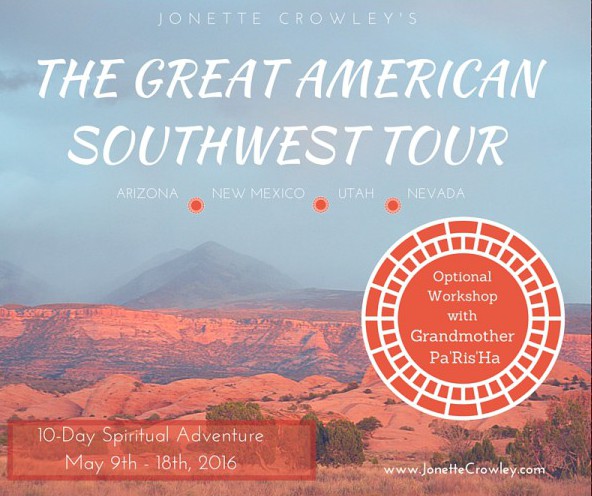 We are so honored to be able to visit a Hopi village in May on our Great American Southwest Tour. Throughout our trip we will be able to meditate, explore the special places of the ancient Anasazi, and perhaps seek our own answers to the mysteries of our origin.

To read the extensive article about this find at the Grand Canyon as reported in the Arizona Gazette go here: http://www.bibliotecapleyades.net