This amazing channeled art comes from Brad Johnson.  He is generously sharing these drawings so that you can travel through them as portals, letting the energy settle around you and bid you to expand. Included with this week’s drawing is a channeling I did recently from Mark’s Quantum Consciousness course series: Creation Part III, class 8. 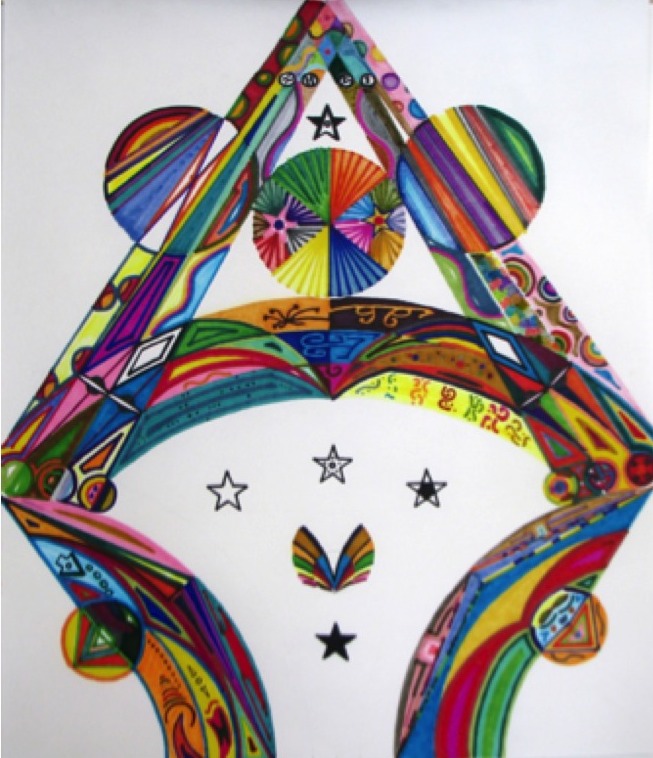 “Let us talk a little bit about your personal identity. You know your identity because you defend it against everything that you claim is not you. You have a false identity protected by false belief systems. We’re asking you to wiggle out of that identity. Diffuse the false belief systems and become the observer’s observer.

“While you continue to consecrate your individual identity, you keep the possibility of multiple realities at bay. You keep reality away from yourself. The complexity, beauty and power of true reality is too big, too fast, too deep, too unusual to allow for the misrepresentation of the small self. Obviously, you still need to live within the boundaries of your small self, but in this class (Quantum Consciousness: Creation Part III) and in the upcoming course (The 9th Dimension: Multiple Parallel Realities which began July 2014), you will spend more time outside your small self— having awareness that isn’t limited by selfhood—allowing yourself to become awareness that is aware of itself—not a small self—but is aware of awareness itself.

“We will repeat again the importance of awareness and acceptance. Accepting is encompassing something as part of you. What it does is not so much change what you accept but it begins to change YOU. The more accepting you are, the bigger you have to be to encompass that which you accept. The more difficult things you accept, the larger you must become to encompass them. There are so many things you deem as unacceptable especially about yourself. Ask those things to show themselves to you so that you can accept them. Accepting doesn’t mean fixing it first and then allowing it in. You cannot fix everything that is unacceptable to you—ever. Rather change yourself to accept everything that comes your way. You become a greater version of yourself and more able to experience parallel multiple dimensions.”

‘Mark’ is a cosmic being channeled by Jonette since 1989. His goal is to lift humanity above the structures of our 3-D consciousness. “Your reality is a reflection of your level of consciousness.” He leads weekly recorded courses introducing us experientially to the higher dimensions of awakening. This is exploration at the very edges of human spiritual awareness. There is nothing like these on-going courses for expansion and transformation. To get a taste of ‘Mark’ for free, go to our ‘Listening Room.’ Click here to order current or past Mark courses as audio links, CD’s, or simply get the transcripts.