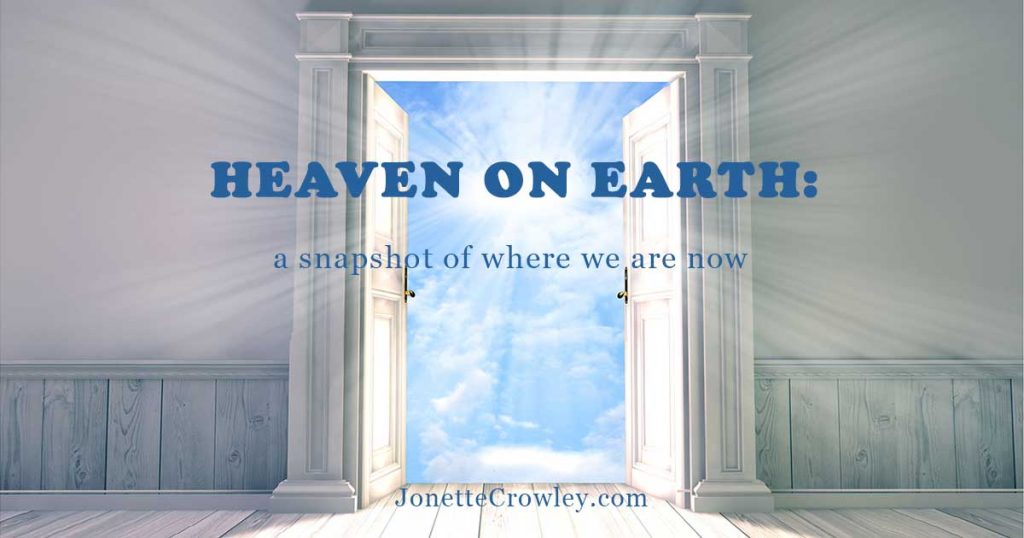 Heaven on Earth... A Snapshot of Where We Are Now

Jonette reports on one of the many breakthroughs she is experiencing with groups in Europe this spring. 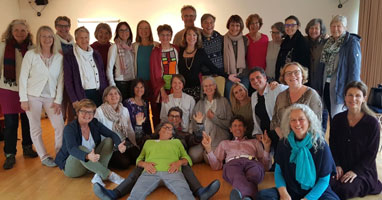 How do I know? I experience escalating breakthroughs in the groups I teach and in my personal meditations. Together we are reaching states of ascendancy that for years we’ve glimpsed but struggled to grasp.

In a recent weekend workshop, I channeled a MARK meditation that catapulted us outside ordinary realms. We were directed through a white door. MARK didn’t explain the meaning of the white door, but I recognized it from previous initiations. It is the second gate of heaven, commonly known as the Pearly Gate.  If someone goes through the first gate of heaven, the Golden Gate, in a near-death experience, they still have the choice to return to their body. But normally when someone passes the Pearly Gate can’t go back to the physical.  I’ve taken groups through this gate in previous initiations but had never seen it spontaneously offered to a group before. With mastery, we collected into ourselves the grace and wisdom of heaven. It didn’t come as information, it came as a space, a high spiritual field. After half an hour of silent ecstasy, we easily returned to Earth— becoming open channels for continuous flow from heaven to Earth.

Our state after the meditation was also a significant milestone, indicating to me that the gates to the higher dimensions are truly open. For instance, there is a trance state of consciousness that I only attain in conjunction with transmitting initiations, the kind of mystical energies that kick people through their next spiritual door. In these states, I hook into a field of consciousness so far beyond me that my ego and personality step aside. My face becomes expressionless as something moves through me into the other. Yet there is no sense of movement, or of energy, or of flow, just the knowing that a transcendent state has been reached. After these initiations, it takes forever to find my body. Often I need to lean on someone in order to walk. But then comes my favorite part of the integration— I feel giddy, silly, lightheaded, the fun feeling after a glass of champagne. Following this meditation, EVERYONE reached this state! We were dizzy, a little drunk feeling, but filled with unstoppable joy! We felt a part of infinite space. Our brains were gratefully empty of thoughts yet filled with All-that-is.

As if providing further confirmation of the permanence of these higher states, the next day in meditation I spontaneously visited my mother who has passed on. She was so real, not like a dream vision. We had a beautiful chat and she agreed to send heavenly love and healing to Earth. Leaving heaven I could actually feel the physical sense of traveling back to Earth and dropping into my body.

In spite of all our preconceived hardships, as a collective we’ve reached an octave of consciousness where the gates of grace are abundantly available. 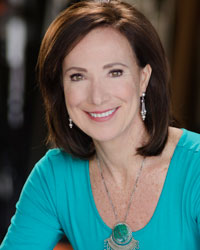 Visit us at: www.JonetteCrowley.com or www.CenterforCreativeConsciousness.com

Posted in Jonette, Meditations and tagged 2nd Gates of Heaven, Jonette Crowley, MARK channeled by Jonette, pearly gates, spiritual evolution
← The Fire at Notre Dame: What is the Spiritual Significance?What is Creation? →