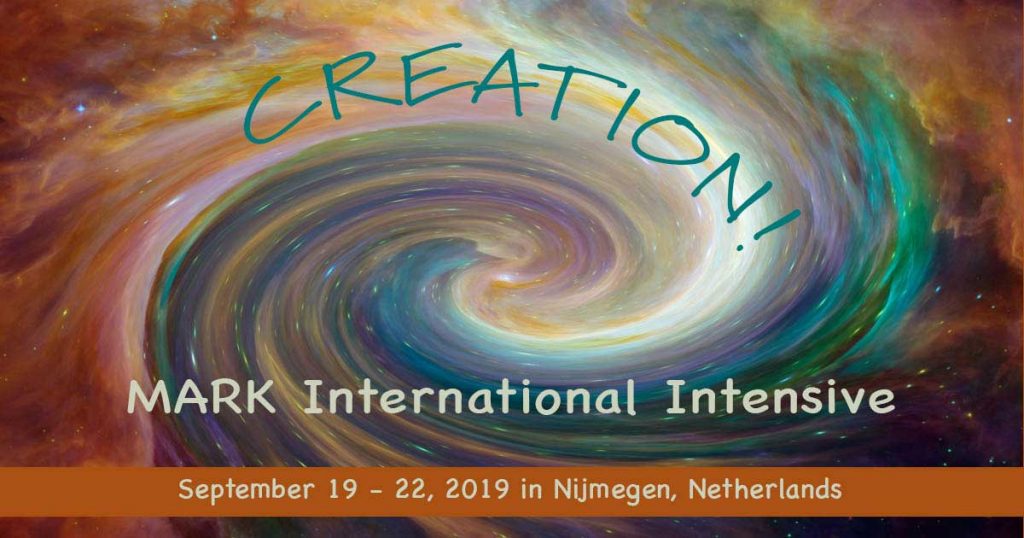 "Feel the breakthrough between observing CREATION and being CREATION!"

Creation is the theme of this year's International MARK Intensive.

“We urge you to explode into your quantum nature; out of your individualized sense of the world. The challenge and the opportunity is to be holographic, not holding onto that center self that you thought was so important. Be holographic, more present everywhere with expanded awareness. Don’t be looking for the center. There is no center anymore.

“The shift is this: You are no longer an object using power to create or to manifest. You ARE manifestation. You ARE CREATION. You can’t decide what you want to manifest. The space is too big to be directed.

“Simply be in the consciousness of the manifestation of CREATION. Be CREATION itself. This creative consciousness doesn’t choose what it creates. It isn’t directed at all. It simply creates, creates, creates. Gaia doesn’t choose to make a butterfly. The butterfly comes out of the CREATION process itself. You are creators too…but you have lost the alchemy.

“The same infinite, co-creative power that Gaia has to produce species in every niche— you are that too. You are not merely a created species. You have the capability to be one with the CREATION/creative field.  This field heals. This field creates.

“You are breaking out of the creative constructs you’ve been in. It’s the consciousness of creation that you are moving into. You’re evolving yourself and that evolves human consciousness. Consciousness is the interplay between your knowing and what is possible.

“Your experimenting in these classes is providing restitution for humanity. It is helping to recreate humanity along a vector that it had moved off of. By the awakening that you and similar groups are doing, you can bring restitution to humankind. Humanity’s potential, Earth’s potential is greater than the linear scope that you can foresee.

“Human thought has been enslaved. It’s been made didactic and limited. But human beingness, beyond thought, can’t be limited or enslaved. You can’t think your way out of where you and Earth are today, but you can surrender out of it, or explore out of it. We’re taking you to experiences that we can’t rationally describe to you. We cannot put it into words to make your personality say, “Yippee! I always wanted that.” We are not giving you things that you say you’ve always wanted, because if you wanted it, it’s way too small.

“We honor your willingness to be raw explorers, who can’t explain to anyone else or even to your own personality the benefits of your exploration. You were born to break through, or you wouldn’t be here. Your presence is proof of your creative instinct. With your awakening, you’ve proven that you haven’t forgotten the potential from whence you came.

“One candle can bring a great deal of light to a dark room. Don’t underestimate the power of you as an individual, and the power of the group to awaken and to fundamentally change the trajectory for humanity. Thank you. This is MARK.”

A biennial gathering of people committed to Self and World Transformation. September 19-22, 2019 in Nijmegen, Netherlands