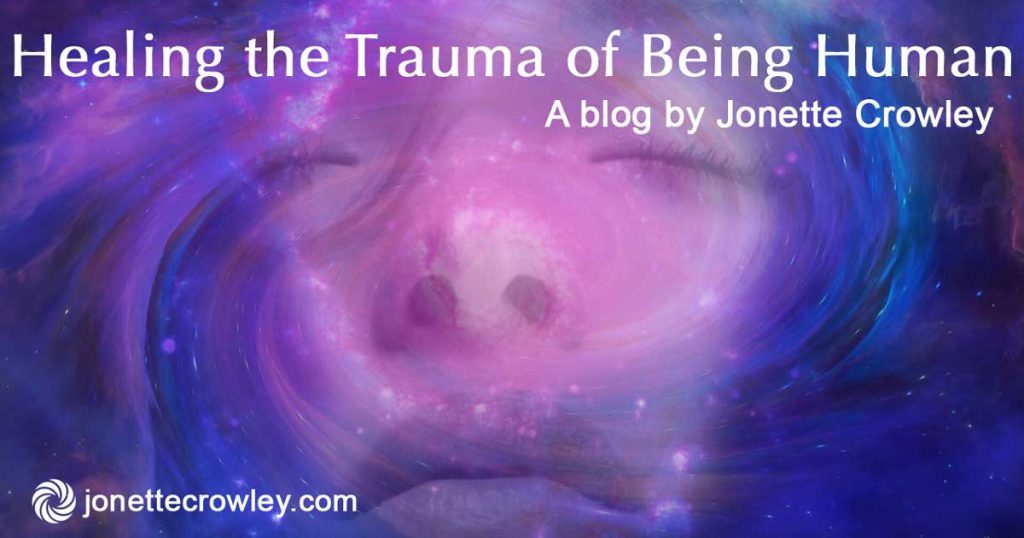 I’ve been where we came from… experiencing All-That-Is, and I’ll never be the same.

As long as I can remember my body has been extremely tense, holding on to some unremembered trauma or fear. Muscles tense, jaw clenched, breathing shallow, ready for fight or flight. It is what drove me to meditation in the first place. I recently found a poem I wrote at the age of 21 that indicates that even then I was dealing with the sadness and trauma of leaving the soul plane to be born in a limited human body. It was leaving my spiritual gifts behind, not the birth itself, that was somehow to blame.

They pushed me through and slammed the door,

They cut the living tie.

There a lie, alone, alive, with a whimper and cry.

To touch what can’t be seen.

To lie and wait, to learn and grow, to find what living means.

I was never in a hurry, but Time had other plans.

Before I ever found my dreams or knew what I was looking for,

I found myself at the other end, confronted by another door.

I seriously considered stepping in, but then,

Last week, while channeling a session to help a client with the same lifelong issue of chronic tension, we broke through into an ascended realm of being. It was an answer to prayers. In these healing journeys I share whatever experience the client is having. I sat in Colorado while Esther Skyped in from Denmark. My spirit guide MARK asked Esther to take her awareness to the highest, clearest state of consciousness she could reach, to a space beyond the physical, and a time before she was conceived on Earth. From that soul space she was asked to imagine what it would feel like to be in a body. “Resistant, heavy, tight,“ were her answers and my experience too. This was quite a revelation, letting us understand that trauma may precede the birth itself, carried in the soul even prior to the physical incarnation. It was clear that we needed to move to an even more expanded state, one where birth didn’t represent any separation or loss of consciousness.

We gently lifted to a higher plane where our souls hadn’t individuated from All-that-Is. In our own way Esther and I each described seeing/knowing all times, all events happening at once. All things merging and flowing into each other. Separation is merely a perspective, a temporary choice made by narrowing down the experience of infinity. Reality... any reality, is likewise a choice to limit all else and forget the higher perspective of being part of the living Oneness.

MARK asked Esther to feel into the idea of incarnating as a human from this transformed state. From here she had no sense of tension, fear or resistance…only lightness. I felt the same. Our awareness had ascended to a perspective of infinite, simultaneous All-ness. From that consciousness, the idea of being born on Earth held no limitation. The new dimension we were experiencing included our lives on Earth AND everything else, all at the same time…well, without time at all.

Esther in Europe and I in the U.S. sat in bliss as the veils vanished. She saw spirals of light and the Earth covered in gold. In the unfolding, ever-moving waves of All-ness we actually experienced no separation, therefore no trauma, no pain, no good, no bad, no fixing, no healing… We witnessed the perfection of the Universe the way yogis and Masters talk about it.

In the past, I’ve logically and spiritually understood where the Enlightened Ones have been trying to take us. But now I was there too. I was one with All-ness. It encompassed and included the part of me on Earth and everything else in existence with no separators such as space and time. Everything was present!

Esther wrote this to me:

“I feel fantastic! After these few days, I still feel transformed. I see things more clearly. Many times each day, I suddenly see everything from above. The important thing to add is that whilst seeing everything from above — I am completely grounded. This is an amazing feeling! I feel more calm and relaxed and more willing to accept things/people as they are (including myself). My knowing of everything and everyone being connected to each other makes so much sense now. All is perfect.”

I believe that our ability to experience this breakthrough is a direct result of our current work channeled from MARK—from his course ‘Beyond Destiny’. Now I am finally there…beyond identity! I have no doubt that more of us will open up into this ascended state of consciousness in the weeks and months to come. There is no going back once you’ve had an experience like this!!

To find out more about Jonette’s work channeling MARK and exploring the higher dimensions, go to JonetteCrowley.com. You can participate in the current courses that are live-streamed, and available as recorded audio/video downloads. You need no experience as the group field carries you along magically. We have many free MARK meditations under the ‘Free’ tab on our website. Come join us in experiencing higher consciousness in a way that changes everything!